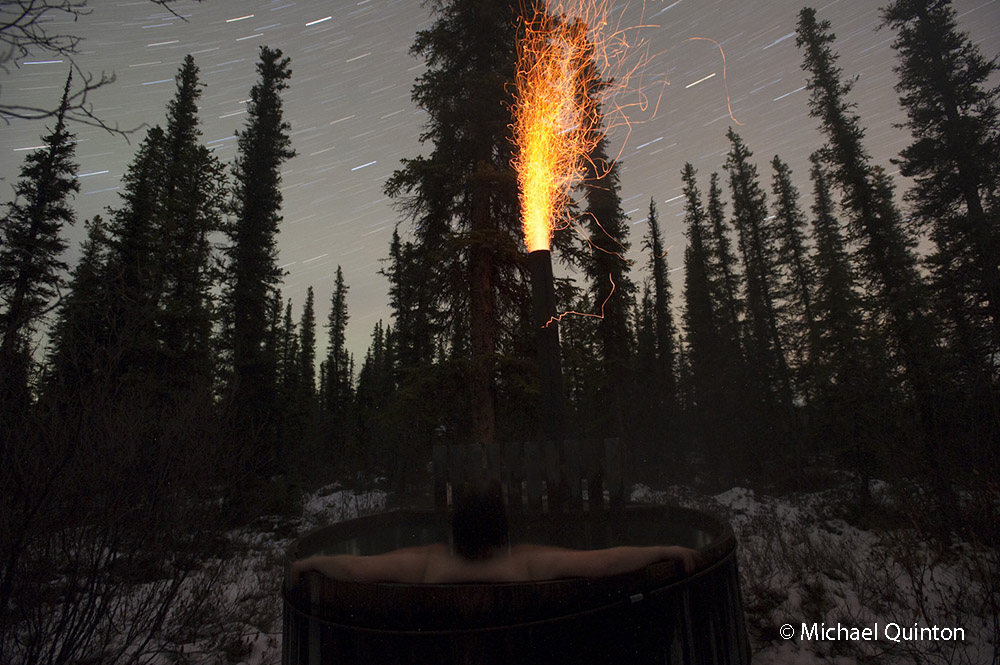 After supper, I built a fire in the hot tub.  Overnight the temperature had dropped to about fifteen below zero F. and the temperature in the hot tub was down to about seventy degrees F.  It takes about two hours to get the hot tub temperature back to one hundred degrees.  Cindy and I jumped in and watched the stars and the occasional meteor streak overhead.  An hour later we climbed out and got dressed in the nearby sauna, also heated with a wood stove.

I noticed a green glow of aurora borealis in the north and decided to take out a camera.  I set the tripod and camera on the ice of Rufus Creek.  The camera was set on interval timer to record a photo every ten seconds that I could later turn into a video.  Returning to the house I told Cindy the aurora was really going for it so she got dressed for the cold and we went outside.  I took along another camera and set it to record the aurora dancing over the house.  We watched as the aurora went crazy.  But it was getting chilly so I suggested we walk out to the hot tub and check the temp.  I slide the lid over and the thermometer read 106 F.  A bit on the warm side but tolerable so we stripped down and jumped in.  And for the next hour we relaxed in luxury and soaked it all in. 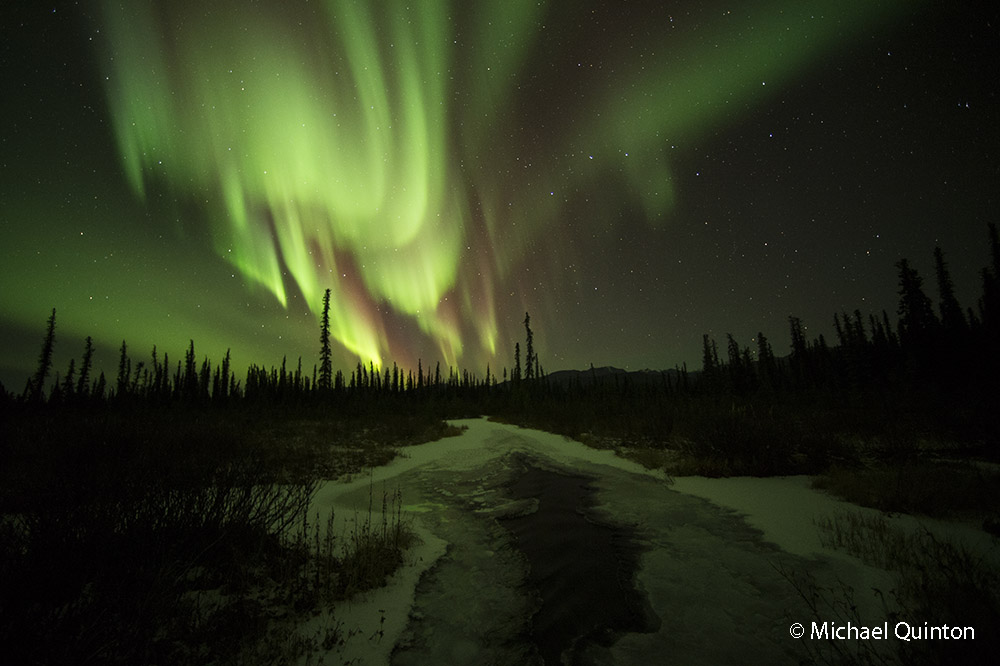 Below are the videos I made.

1850 still photos into a one minute video.

Each winter dall sheep migrate to their rugged, windswept slopes.  It is here that their dramatic rut takes place.

I braved the twenty below night temperatures, took 1,159 photos over a four hour period and linked them into a munute long video. 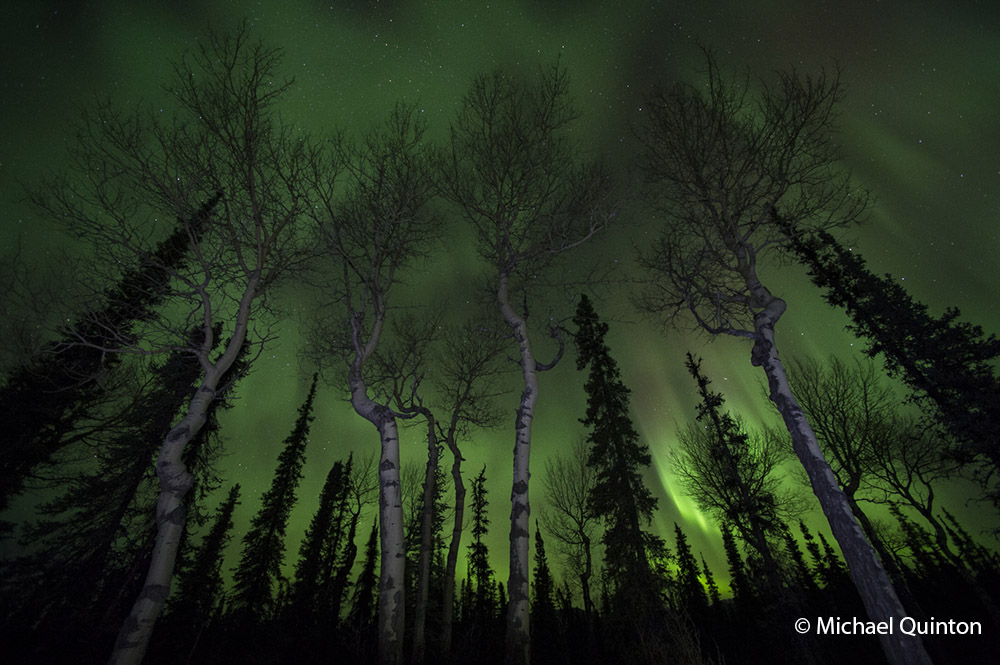 For the past six weeks or so we have been delighted by the nocturnal trilling song of a little boreal owl.   I believe the male has claimed our little forested yard as his own.  He sings almost every night from one of the old northern flicker cavities in the black spruce stand surrounding our home.  With his little round head filling up the hole he serenades the darkness, or sometimes accompanies the glow and flicker of the aurora.

Click on the left side of the audio bar to hear the song of the boreal owl. 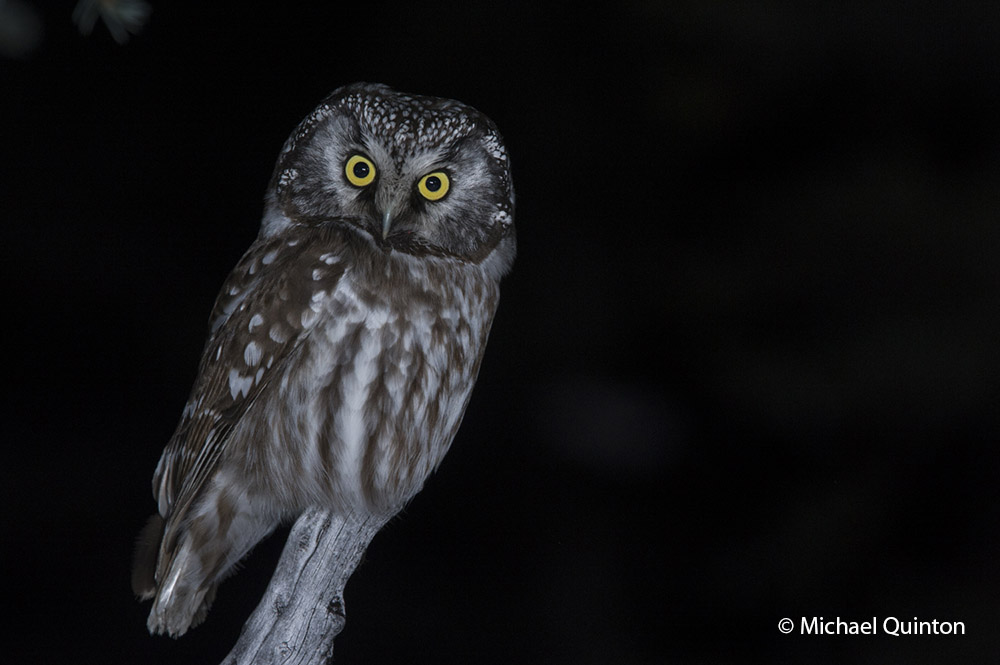 The boreal owl is a nocturnal hunter of voles, shrews, flying squirrels  and small birds. 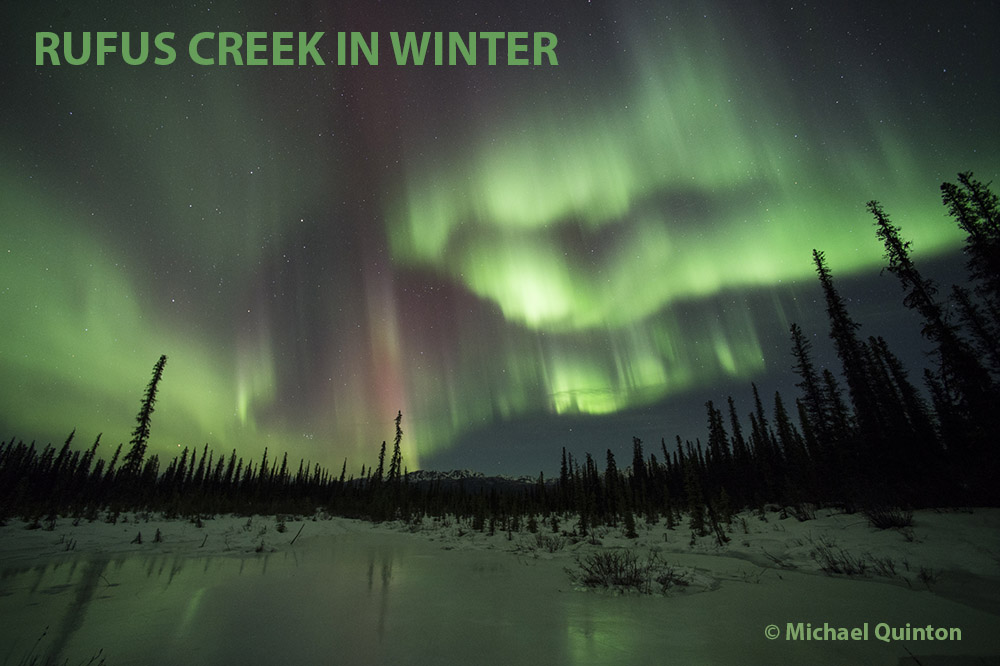 Rufus Creek flows through our ten acres of black spruce forest on its way North to the Slana River.  The northern boreal forest is a patchwork of dynamic land forms and plant communities, niches that a  few hardy species of wildlife can exploit.  Diversity of life here is low but the species and settings are spectacular. END_OF_DOCUMENT_TOKEN_TO_BE_REPLACED 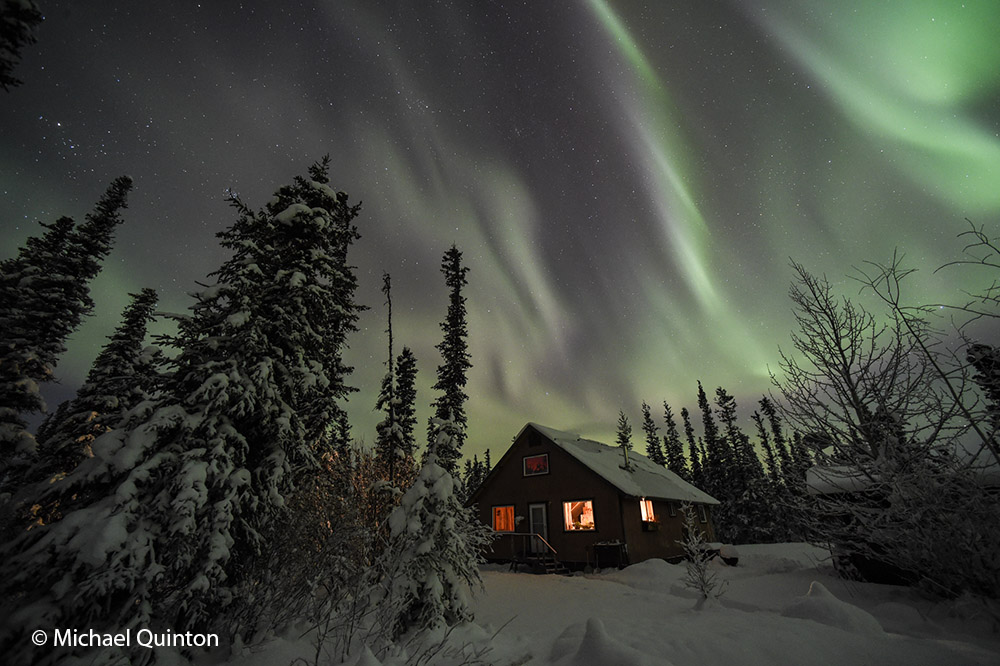 Our home in the wilderness.

This post is in support of the recent story that appeared in the February 2016 issue of Country Magazine.  The story is about our families life in Alaska.  The following photographs are some that did not make the final layout in the magazine.  Several Country Magazine readers have requested to see more photos.  This is for you. END_OF_DOCUMENT_TOKEN_TO_BE_REPLACED 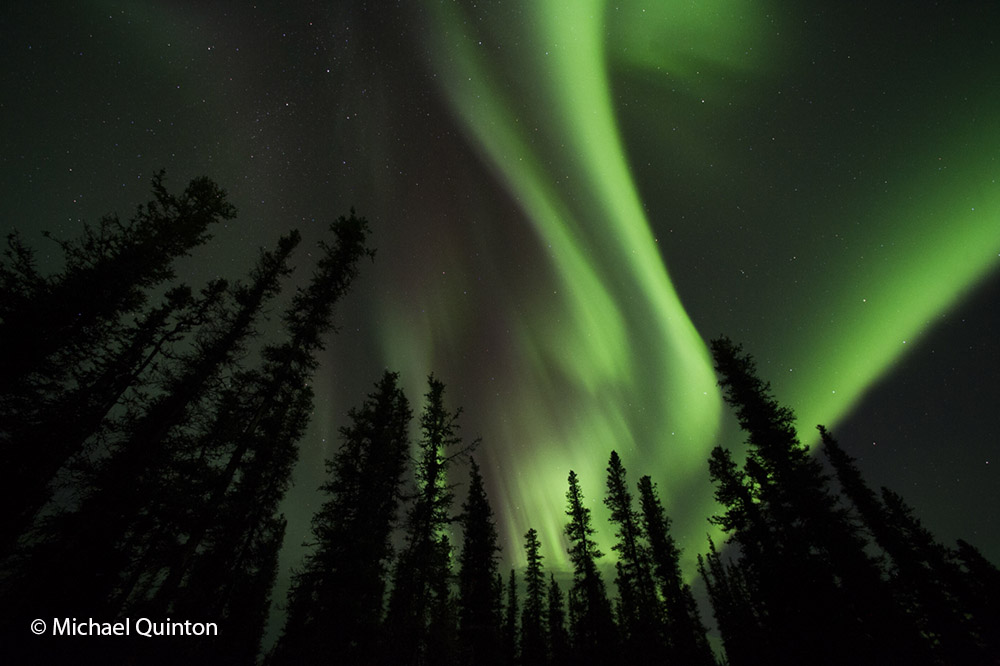 Aurora borealis in my back yard.  Slana, Alaska

The aurora borealis displays are really picking up this year.  After a few years of slow aurora activity its an exciting change and a great excuse for stay up late and snapping a few photographs.  With todays wonderful digital cameras getting great aurora photos is easier than ever.  I remember the day when I had only Kodachrome film with an ASA speed of either 25 or 64.  Living in Alaska it could take more than two weeks just to get your processed film returned and check your results.  Today you can snap a shot or two check the exposure using  your histogram display, adjust your exposure if necessary and shoot away .  You can be confident of what you’re getting. END_OF_DOCUMENT_TOKEN_TO_BE_REPLACED 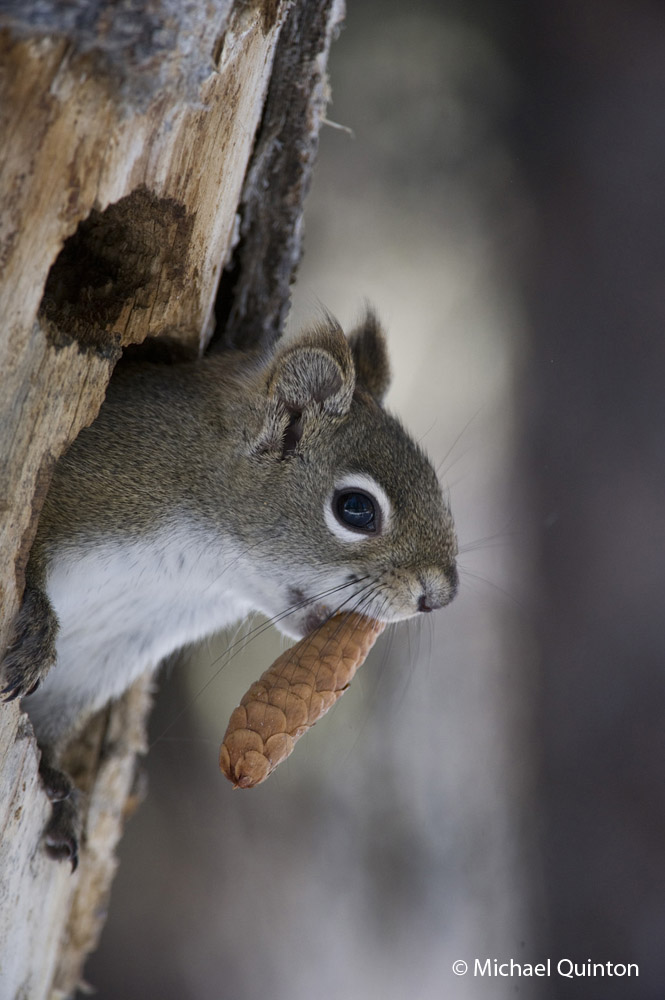 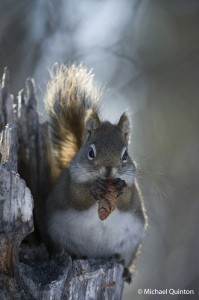 I am still on my backyard safari.  This is where I do some of my favorite work.  I have had professional photographers scoff at the mere suggestion of doing in-depth work with such “insignificant” species as the red squirrels, voles and the like. But I happen to enjoy photographing all species of wildlife including red squirrels.  The idea of a backyard safari is to give one the incentive to compile a complete coverage of the wildlife in your immediate surroundings as well as gaining experience turning photographic potential into great photographs.

Red squirrel pry the scales off a spruce cone and feeds on the tiny seeds. 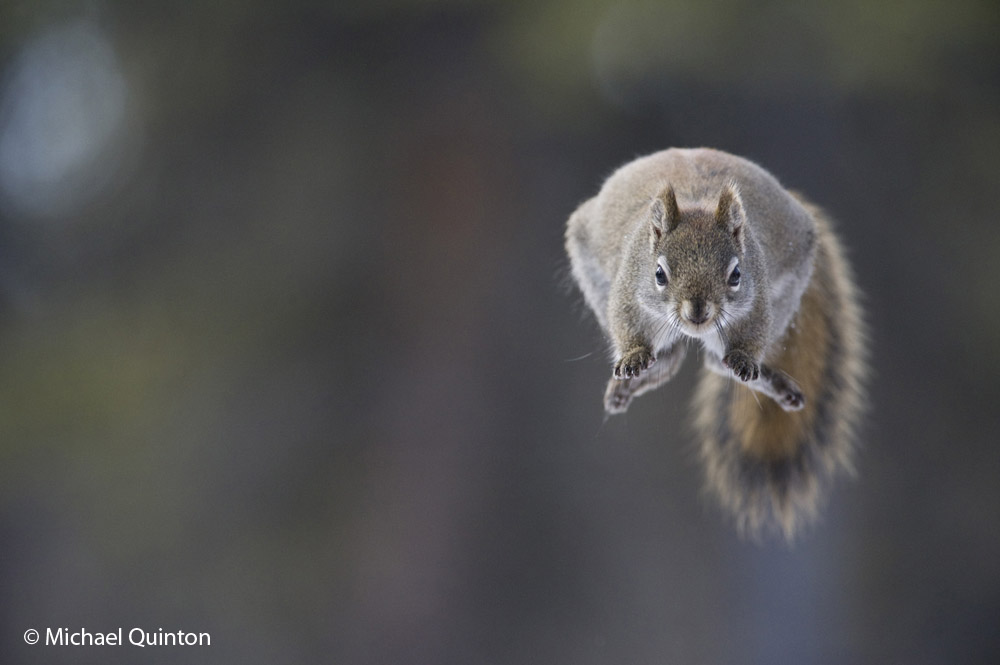 The red squirrel jumping straight on is a tough one.  I found a place where the squirrel routinely jumps form one branch to another.  The distance is just over three feet and it takes less than a second.  The problem lies in the tiny amount of depth of field with the 560 mm telephoto lens.  I use a Nikon 200-400 lens with a 1.4 tele-extender and pre-focus at about 4 meters.  There is less than one inch that will be in sharp focus.  I manage to get off about three frames each time the squirrel jumps and only about one in fifty photos will be in focus.  What that boils down to is about one photo every four days will be a keeper.  I could increase the percent of successful shots by adding a trigger which trips the shutter as the squirrel crosses a beam of infra-red light.  Maybe next week. 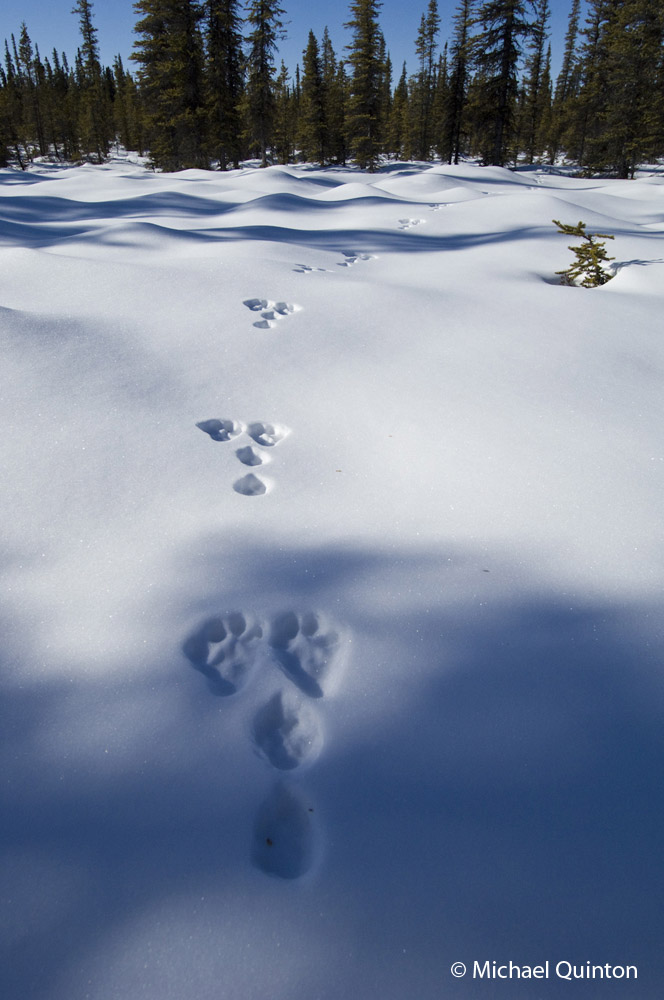 One of the few sets of snowshoe hare tracks I have seen in the backyard this winter.  They are currently at the low-end of their population cycle.

The male boreal owl is still calling from the flicker holes but not every night.  I suspect he is also singing his territorial songs from other possible nesting sites in the area. 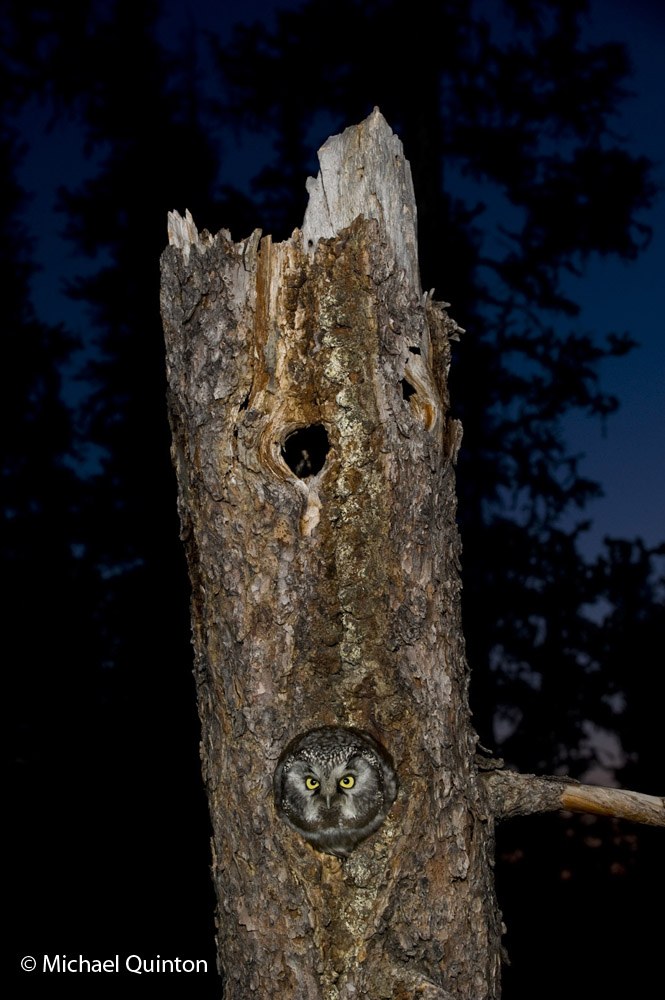 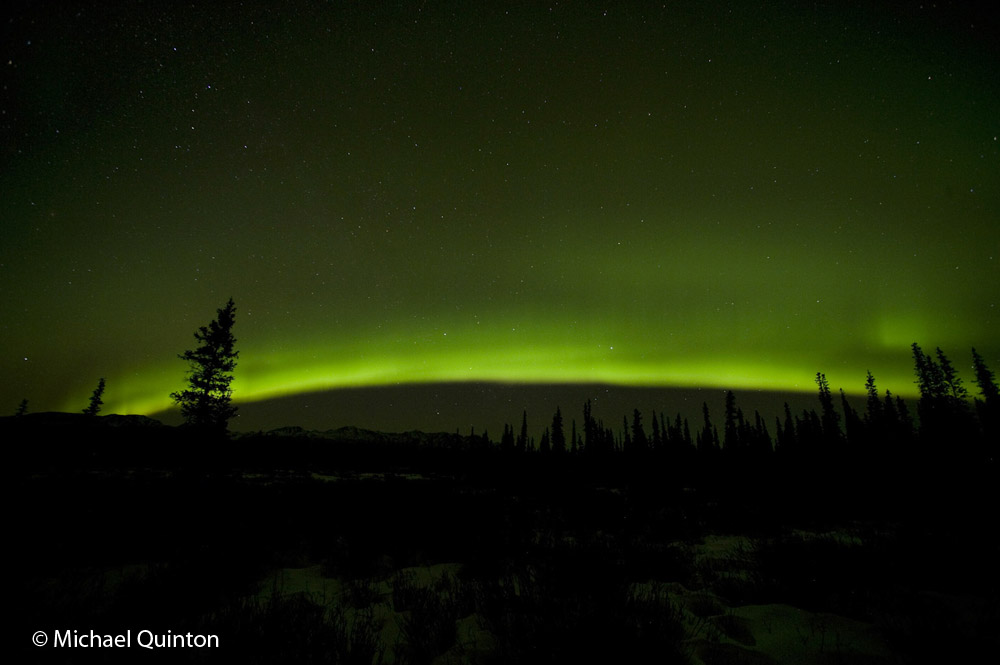 The aurora borealis usually begins with a band of green, glowing light in the northeast. 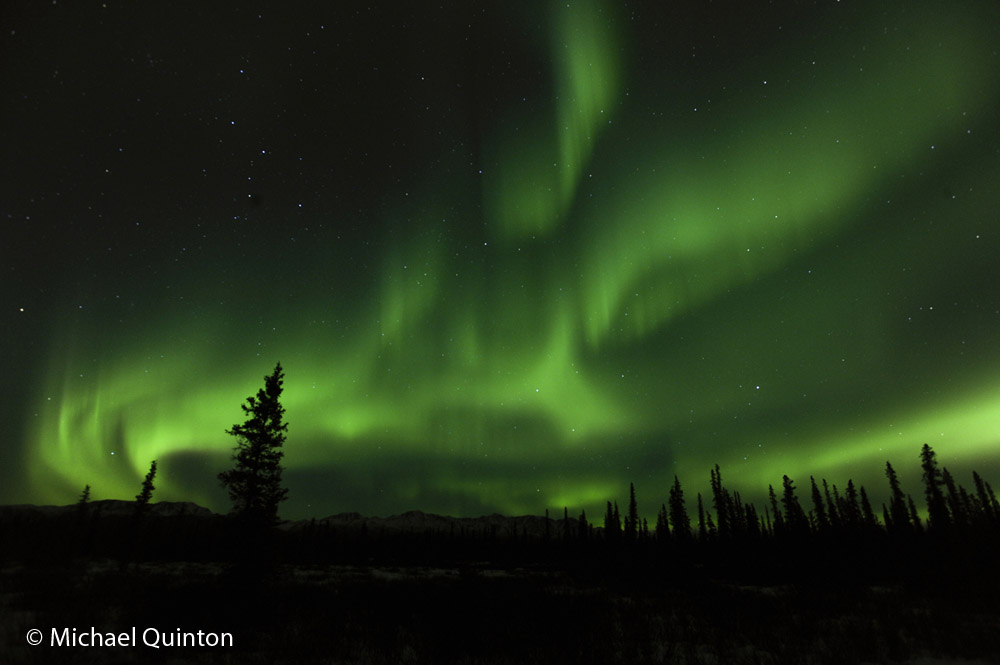 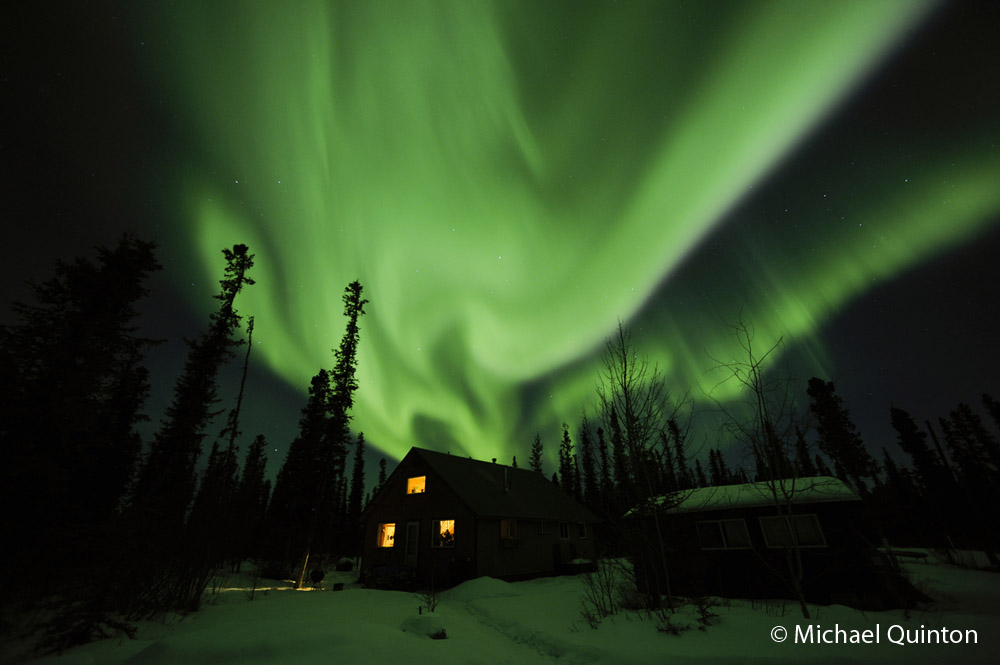 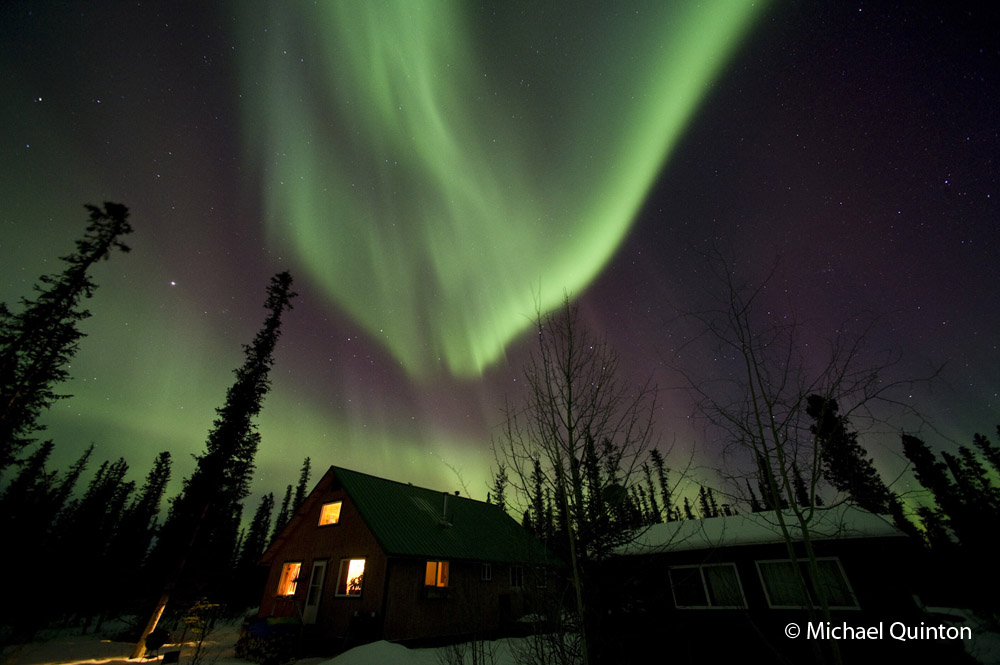 .All week I have been on  safari, backyard safari that is, trying to sniff out a few photographs. I continue working with the pine grosbeaks and red squirrels but they have proven tough subjects.  Yes even squirrels can be very challenging especially when you try for something new.  Last night a fantastic aurora show kept me busy for a few hours after midnight.  The unexpected beauty made up for those frustrating red squirrels. 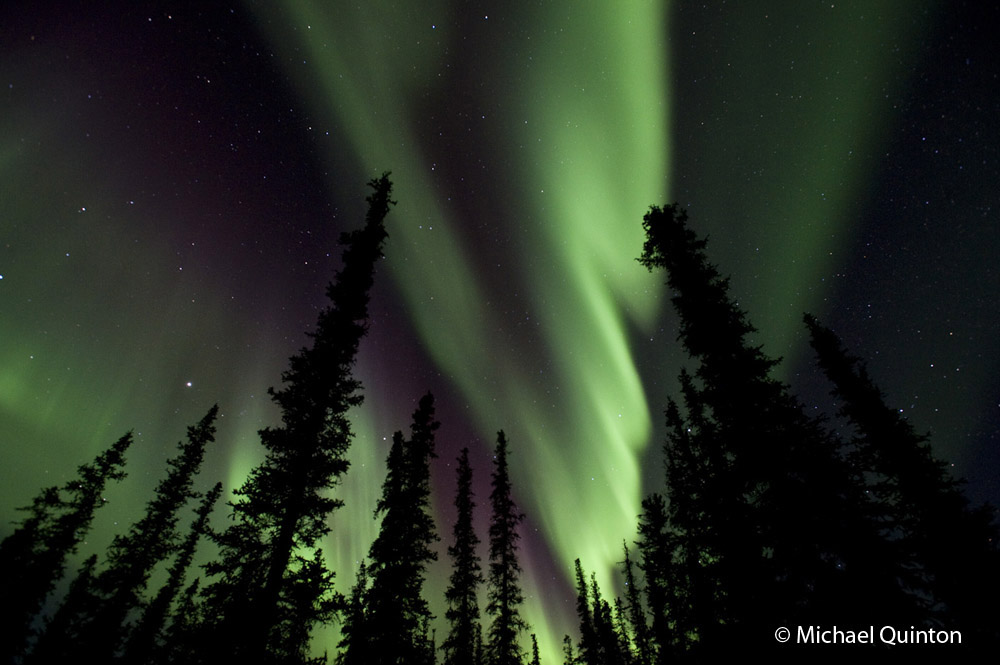 For the past couple weeks a boreal owl has been singing after dark.  I had developed this situation by placing a couple of ladders within camera range of his singing posts.  He sings his territorial song while sitting at the entrance of a couple of old northern flicker nesting cavities.  On top of the ladders, I mounted ball heads so I could climb and place my telephoto lens and flash bracket quickly and quietly.  As I photographed the aurora borealis the boreal owl was singing from both of the flicker cavities.  During lulls in the aurora activity, I approached the cavities to see what was going on.  At one cavity there was no owl at the hole and I could hear the male singing from the other cavity.  Just for fun I scratched the tree trunk and to my surprise the head of a boreal owl emerged.  There were two boreal owls!  The male had attracted a mate.  That was exciting news.  Perhaps they would choose one of the cavities for their nest. 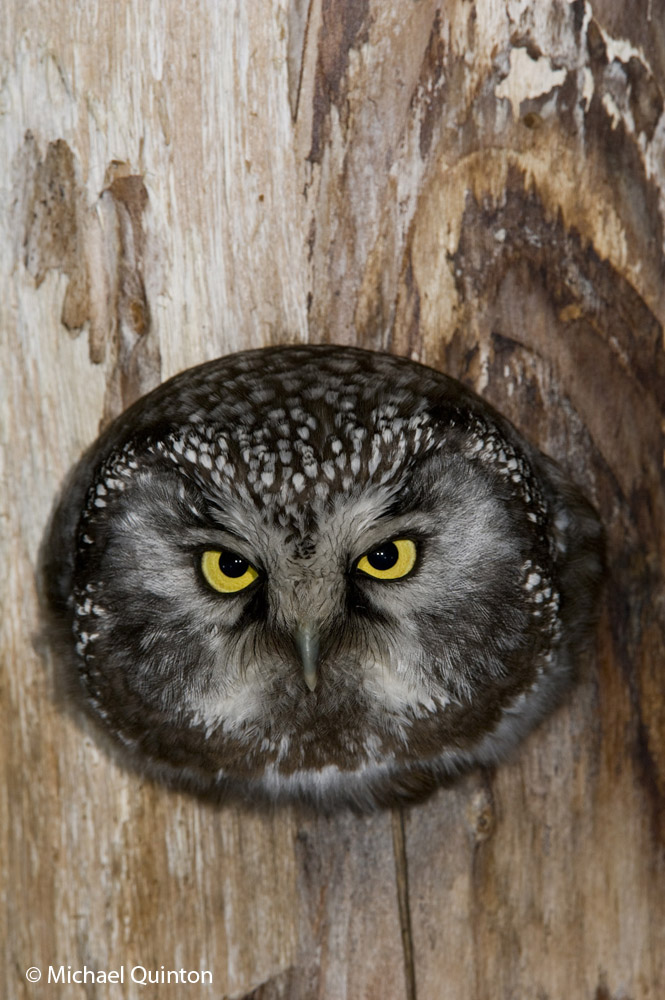 Male boreal owl stares out from the northern flicker cavity. 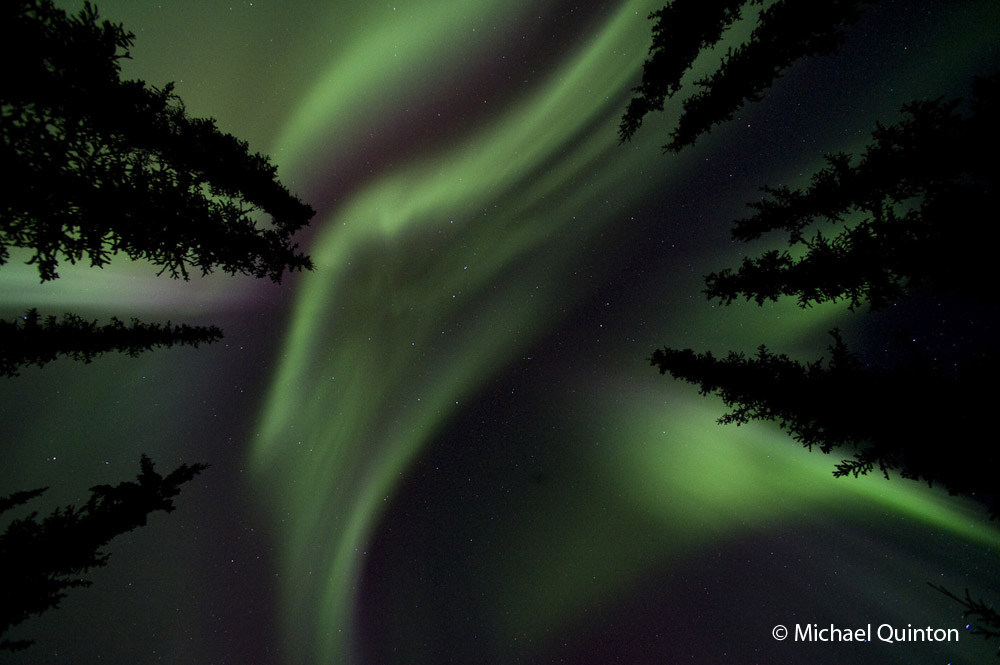 Month after month of white, gray, blue and green of the cold interior Alaskan winters leaves me wishing for warmer hues.  Fortunately warmer colors in winter are out there, if you look close enough. 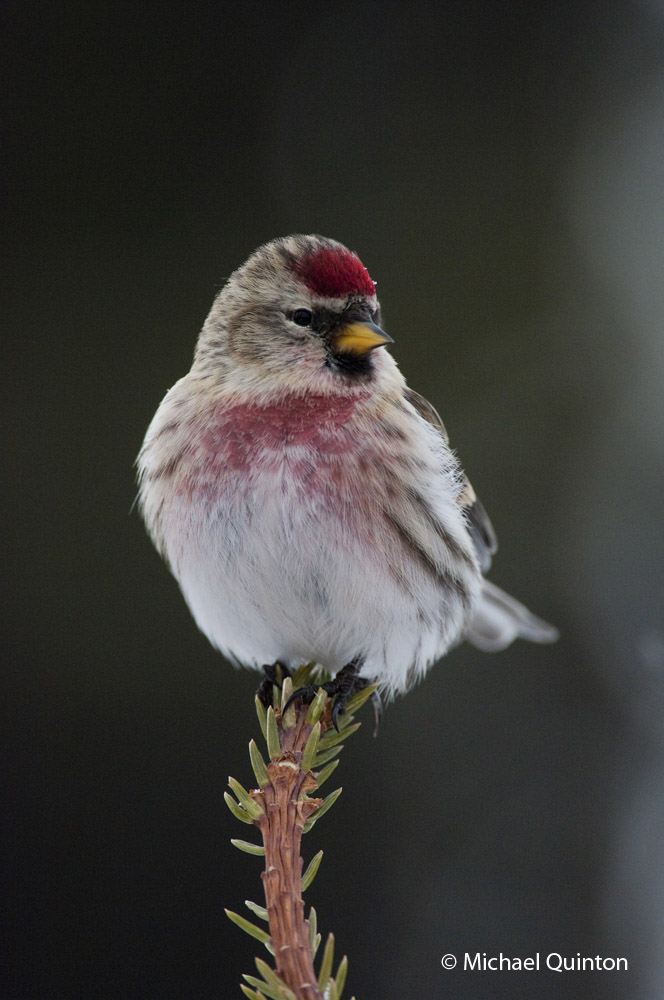 The common red poll adds a tiny  touch of color to the long Alaskan winter. 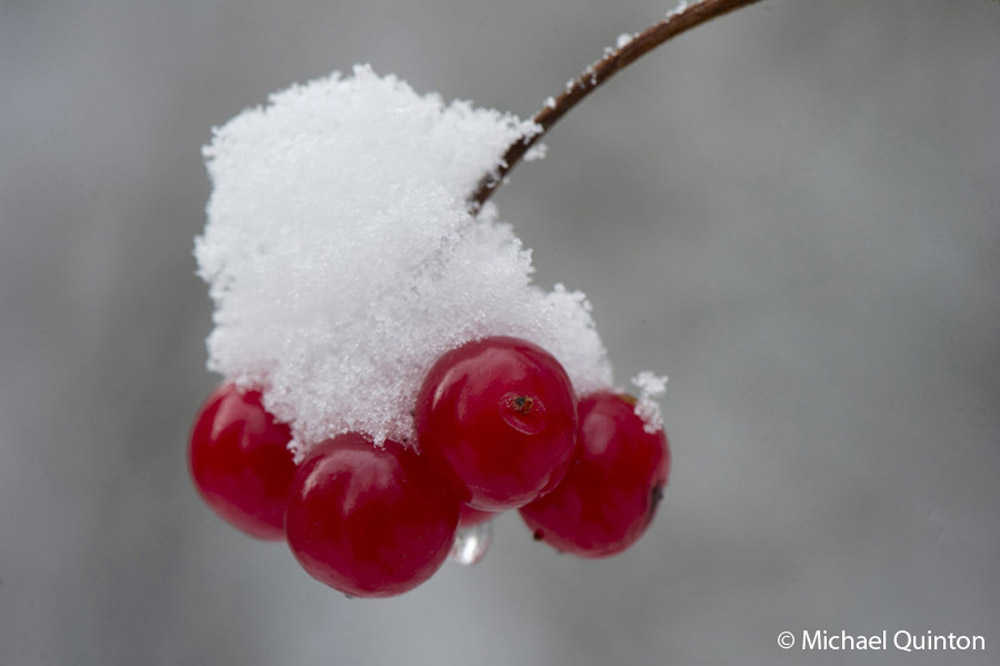 The fruit of the high-bush cranberry seems to be to winter resistant. 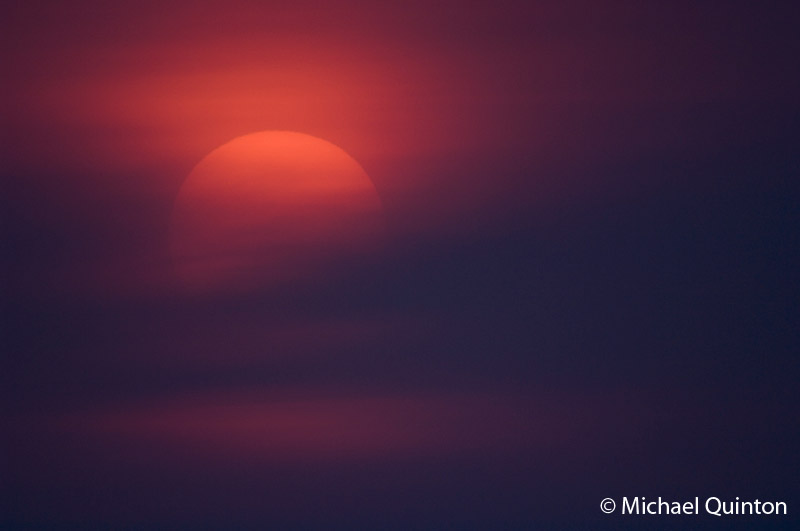 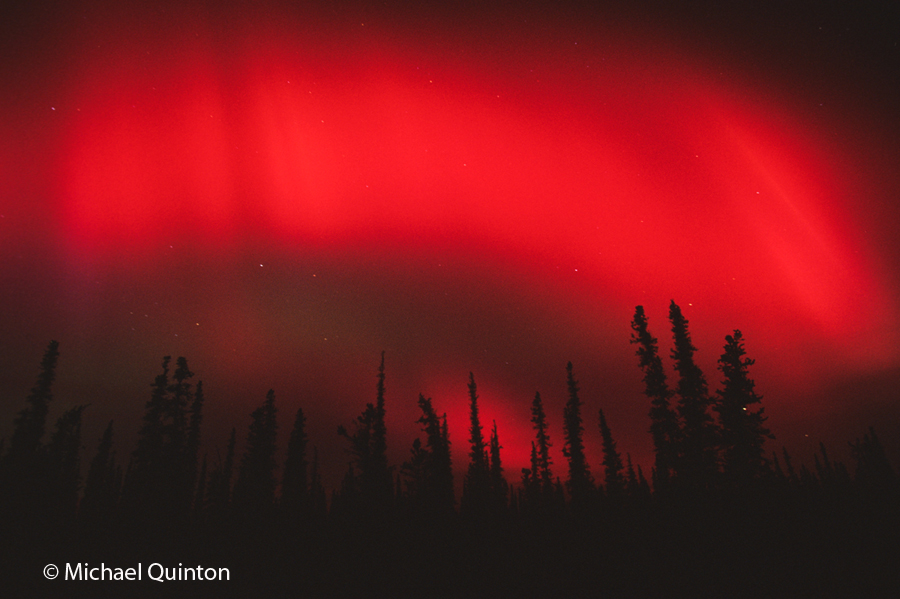 A rare crimson aurora sets the night sky on fire.