Yesterday I climbed a ladder twenty feet up to a natural hole in a decaying poplar within the boreal owl territory. I had found the male inside the cavity once, so I had always thought it was a likely place for a nest.  I took a quick look inside the cavity with flashlight and mirror but there was nothing inside.  A single gray, downy feather clung to the bark on the outside. The owl must have been spending some time there, I thought. When I looked around I was surprised to see the little boreal owl glaring at me from about ten feet away. It was clearly agitated that I was at the hole. A few minutes later as I photographed the owl from the ground, I suddenly heard the rapid calling of the male.  But it wasn’t the owl I was photographing.  There are two boreal owls here!

This morning just after six a. m. I returned to the owl territory. As I neared the poplar the cavity seemed to have vanished.  Through binoculars I could see the female was at the cavity entrance peering out at me.  What perfect camoflauge. It has been fifty one days since I first located the little male boreal owl.  Well, it seems that all his persistant singing has finally paid off. 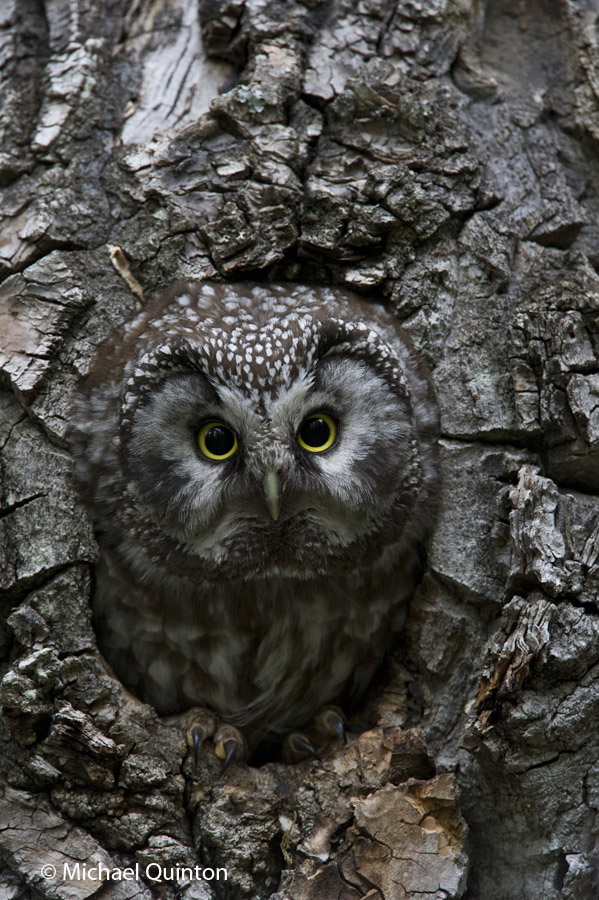