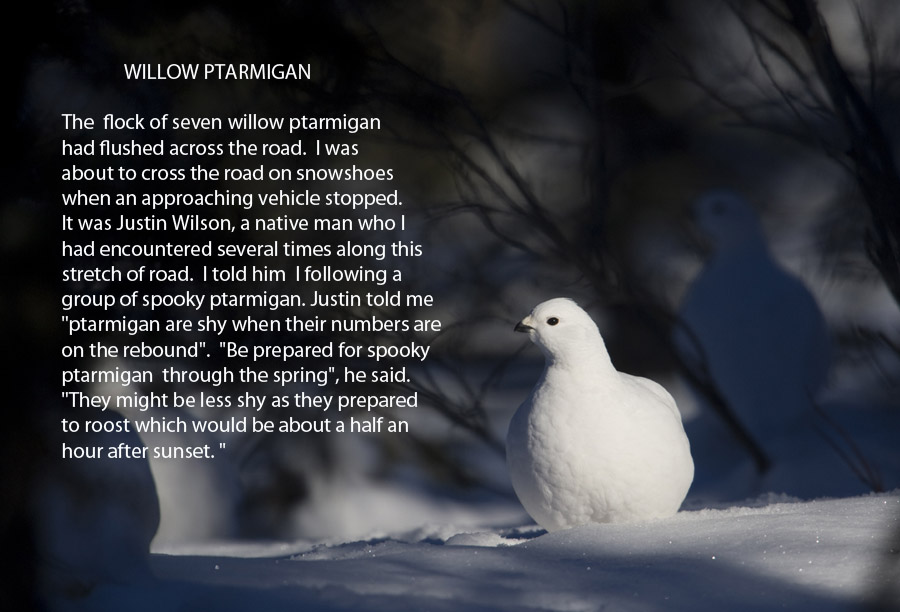 I’ve spent the last four afternoons looking for willow ptarmigan.  One of my photographic goals is to document more of their interesting behavior.  On top of that list of photo wants are photos of willow ptarmigan in their snow burrows.  Ptarmigan use snow to help insulate them against the frigid winter temperatures of interior Alaska.  Their use of snow burrows can occur any time of the day but most common as they prepare to roost for the night.  Willow ptarmigan are cyclic and their numbers have been quite low over the past two or three winters.  But as Justin pointed out, they seem to be bouncing back.

Each day I have been able to find small flocks of willow ptarmigan by driving the open areas and slowing down wherever I see fresh tracks.  In years past I could count on approaching these flocks and after flushing them three or four times, they would settle down and finally sit tight as I slowly approached.  Within a short time they became accustomed to my presence.  This year, however, they seem to be much more nervous, quickly flushing as I approached and never calming down.  Perhaps there is more people hunting them.  Yes, hunting in the National Park.  Hunting is legal under Federal subsistence regulations.  Or is it like Justin says, they are just more shy as their numbers increase.  As a survival adaptation it seems to make sense. 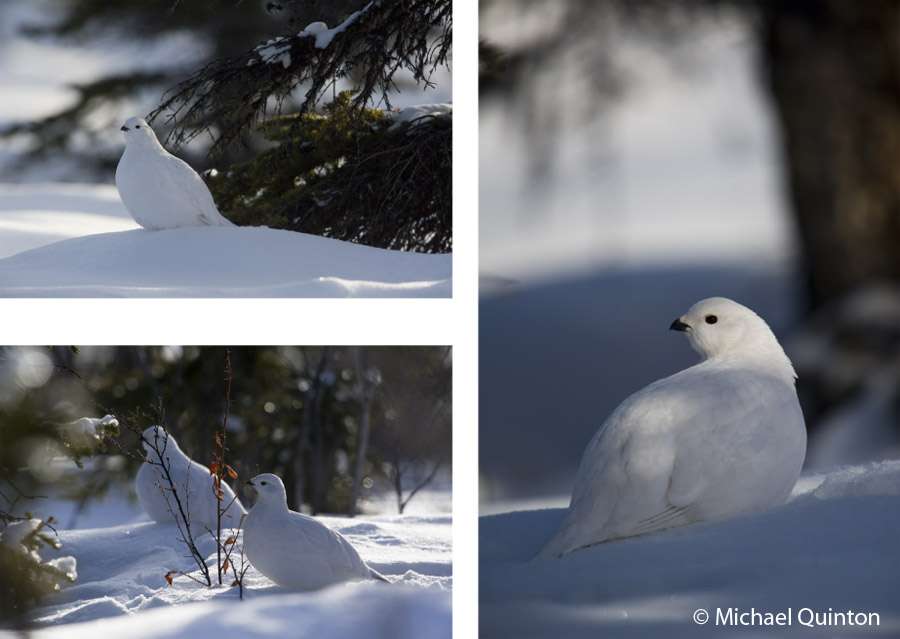 Approaching the ptarmigan too quickly or making certain sounds such as crunching the crusty snow with snowshoes was obviously alarming to the ptarmigan.  When I did manage to get into camera range with my 600 mm lens the ptarmigan would try keeping spruce trees between us.  Then the gang of ptarmigan would shuffle away, stopping briefly at low willows to quickly pluck a few dry rust colored leaves.   I was lucky enough to get a few portraits of the willow ptarmigan but not the behavior I was really after.

The success of this kind of photographic pursuit cannot be measured entirely on the production of photographs.  The exercise snowshoeing delivers cannot be beat, not to mention the pleasure of just traveling in this stark wilderness. For a while I followed the trail of a wandering wolverine.  And, along a small frozen lake I came across an interesting story written in the snow by a lynx, wolves and a fox.  Their tracks led to an old wolf kill. Nothing remained but tuffs of hair and the stomach where these predators/scavengers had fed.  I blasted my predator call a few times but nothing showed. 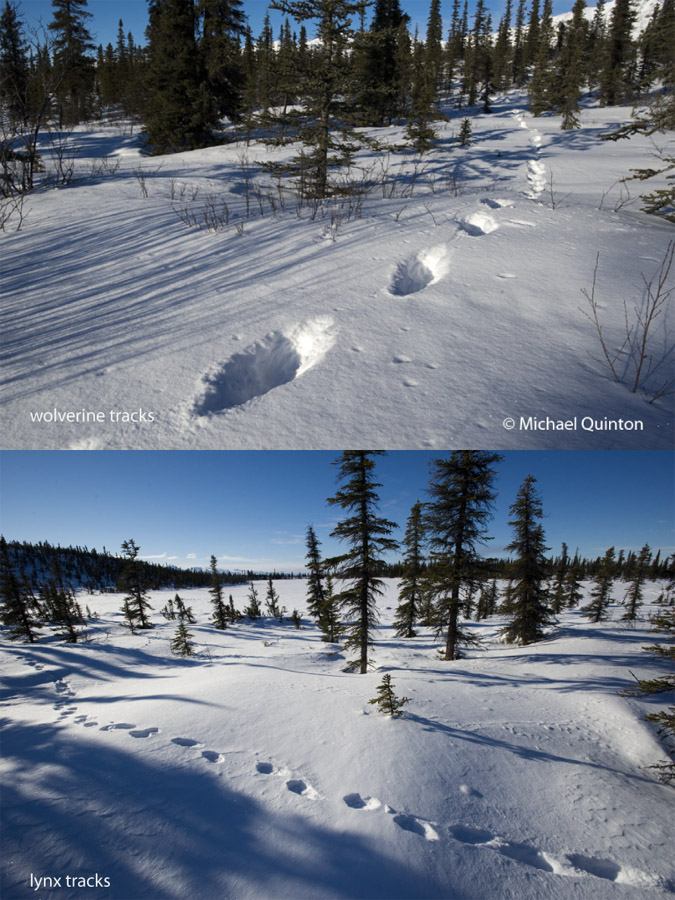 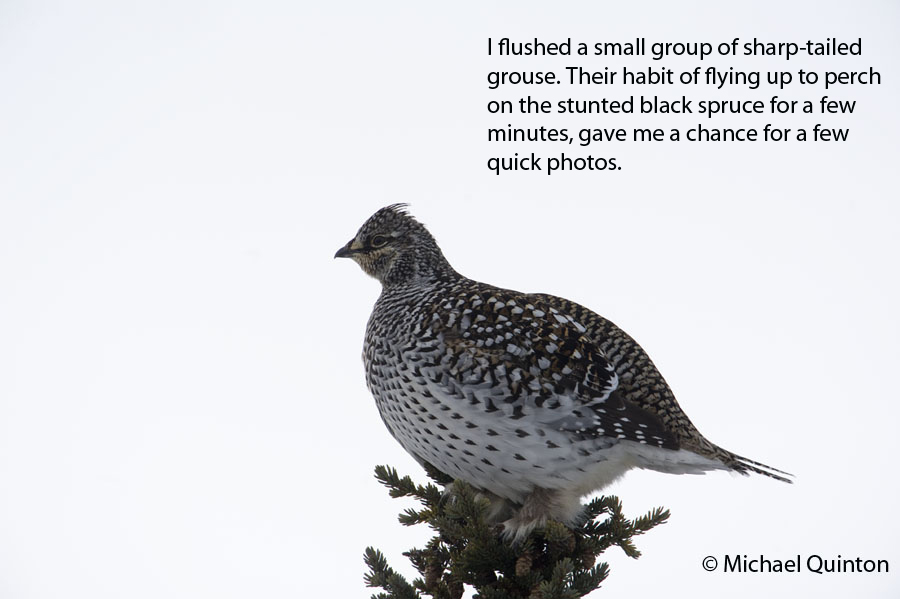 Driving back home later that evening I came upon a hunter with his shotgun and  two black labs working their way down the road where willows and ptarmigan tracks were thick.  No doubt hunting was at least in part the reason for the shy ptarmigan.

There is something alluring and exceedingly beautiful about the white willow ptarmigan in snow.  I plan to continue pursuing the willow ptarmigan for the next few weeks.   Perhaps trying to get into more remote country where they might be a bit less skittish. 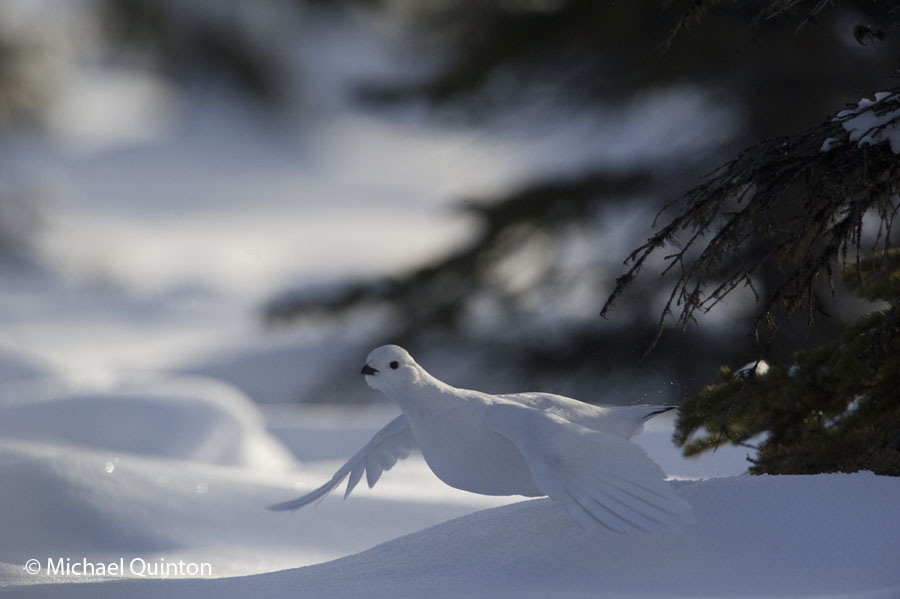