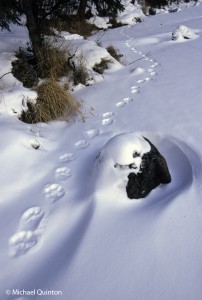 ON THE TRAIL OF THE LYNX

I’d been on their track for  a mile or two. It had taken nearly two hours to get this far moving slowly through the forest on snowshoes. The thick and stunted boreal forest was mostly black spruce. Small stands of tall aspen and veins of thick and lofty white spruce stood where the nutrient poor soil drained enough to prevent permafrost. The understory consisted of numerous species of willow along with Labrador tea and blueberry. Tracks and trails of snowshoe hares were everywhere. The snowshoe hare population undergoes huge swings in numbers during their ten-year cycle. Likewise, other prey species such as spruce grouse were on the upswing driven by years of low predator numbers. The hare population had peaked. And with the increasing snowshoe and grouse population, lynx, coyotes, red fox, northern goshawks and great horned owls, and even the smaller northern hawk owl populations were once again on the rebound. 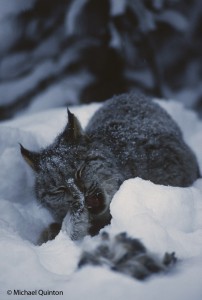 Lynx have very large and distinctive tracks. But due to the sheer numbers of hare tracks, following the lynx was not easy. Lynx would often travel on well-worn hare trails and their track would simply vanish. Then it took time to unravel their route. Combine this with the fact that more than one lynx were working the hares and it could be real challenge to keep on a fresh set of tracks. Squatting low with a heavy pack full of camera gear, I passed beneath a snow laden tree bent over the track. and, when I looked up there was a lynx. It crouched in the deep powder snow less than a hundred feet away feeding on a recently killed snowshoe hare. As I frantically dug for my camera, telephoto and tripod another lynx walked into view and sat on its haunches, patiently waiting his turn. I quickly fired off a couple rolls of film. By the time the waiting lynx got his chance there wasn’t much left but a few bloody sinews of two big hind feet. In the background I would catch a glimpse of a couple other lynx as they moved silently thru openings in the willows and trees. I was surrounded by a family group, a mother lynx and her three-quarters grown kittens. In the weeks that followed I tracked this family several times and came to learn she had four kittens. Their hunting technique became clear. They would spread out as they walked through the forest, perhaps a hundred feet or so apart. When one lynx would surprise a hare it would often run past another. I found numerous kills they had made in this way. This mother lynx was shy. Each time I caught up to the family group  they would quickly head out to avoid me. I would hear a loud wail from mamma lynx warning her kittens that they were not alone. This was their cue to pick up the pace. After that I could only occasionally catch a fleeting glimpse of the cats ahead of me. 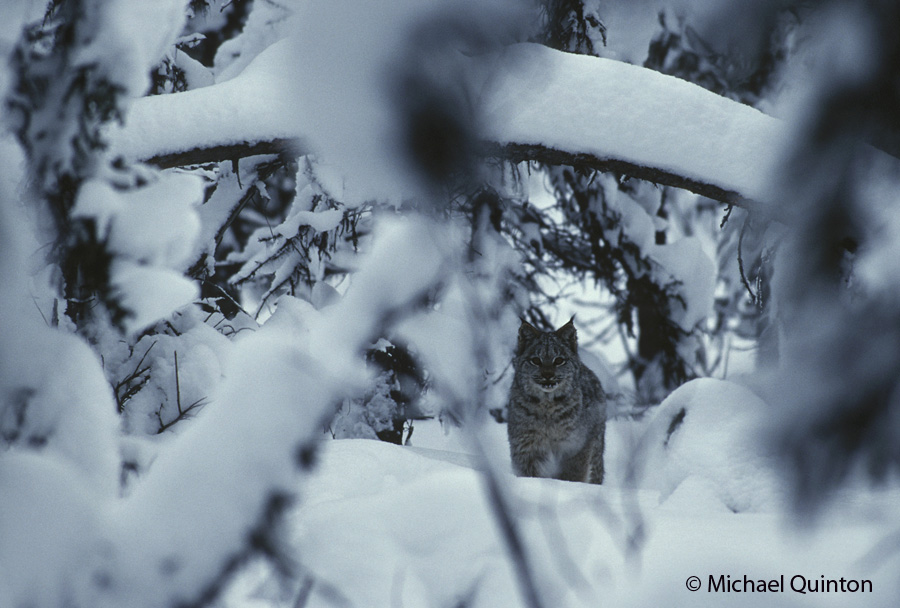 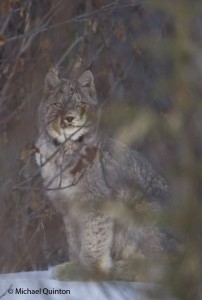 Following the tracks of predators is always interesting but not usually very productive if your goal is to catch up for photographic opportunities. Predators like coyotes, wolf, fox and wolverine move too quickly and travel too far to ever have much chance of catching up. Lynx on the other hand travel slowly, stopping often to watch for prey. As they travel in their still hunting method they might move only about one mile per hour. Now that is a speed where a human does stand a chance of catching up. So long as the track is fresh. In Alaska’s cold temperatures and infrequent snowstorms, tracks tend to last for weeks, even months. One technique for judging the age of tracks is to give them the lift test. Tracks older than about an hour will set up, turn hard and can be carefully picked up.  Any track you can pick up is generally too old to follow.  Fresh tracks are soft and fall apart  when you try lifting them. 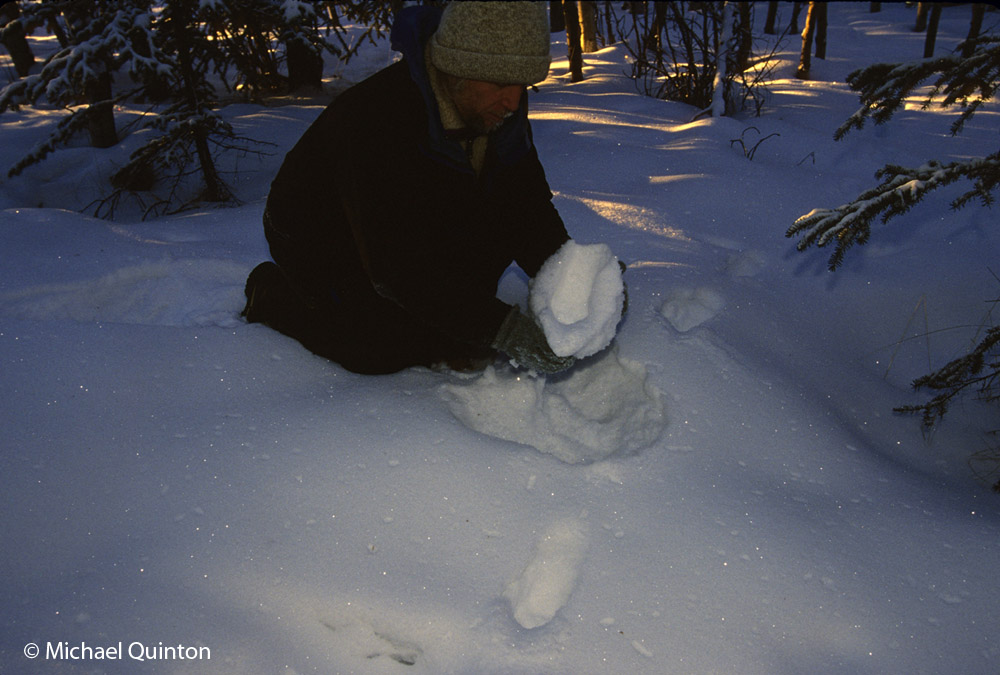 Tracks that are older than an hour are “set” and can be picked up but are too old to follow with any hope of catching up. 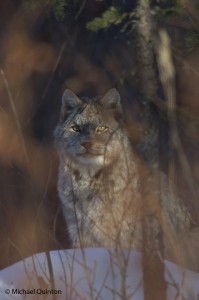 Some lynx seem to have no fear of humans.  One particular adult allowed me to photograph it for five days in a row. The 1200 photos I was able to make made up for an awful lot of fruitless days. 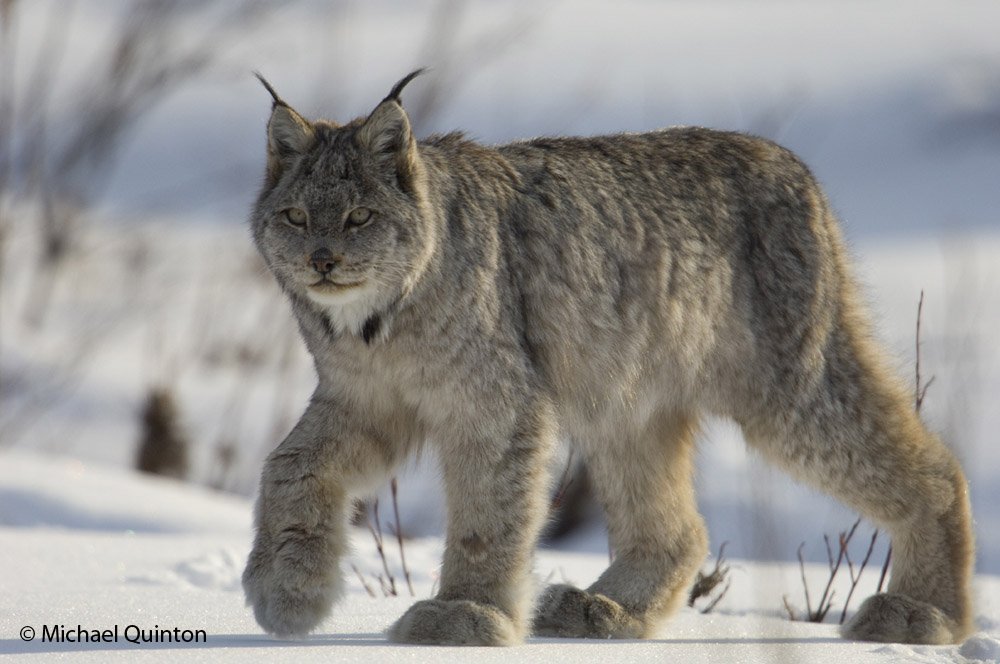 Huge feet are an adaptation of living in the northern boreal forest where winter lasts for half the year.

One thought on “TRACKING THE LYNX”