Some authors claim the lynx is strictly a hunter-predator.   I have observed several lynx that do not fit perfectly into that mold.  I do think lynx prefer fresh game they have killed themselves, But what if game is scarce and lynx are very hungry?  This is the situation in much of interior Alaska this winter.  The snowshoe hare population is currently at the bottom of its ten-year cycle.  There are always a few snowshoe hares in prime habitat which is thick, white or black spruce mixed with a variety of other trees such as aspen, birch or poplar as well as willows and alder.  But in the stands of pure black spruce, which dominate much of the landscape near my home snowshoe hare tracks are nearly absent.  What remains for the lynx are primarily red squirrels, spruce grouse, willow ptarmigan, and voles.  Lynx have been known to kill and eat red fox but that is not common.  Same goes for mink, marten and the short-tailed weasel.  And I suppose the lucky lynx could catch a woodpecker or gray jay if they were distracted.

This week I followed the meandering track of a lynx through the nearly trackless black spruce forest.  A half-inch of snow the night before made new tracks look fresh and crisp.  I had gone just half a mile when I saw a big head looking at me over a snow bank. Those long ear tufts made my heart stop.  Catching sight of a wild lynx is quite an exciting and infrequent event.

A few feet from where the lynx lay were a few well gnawed moose bones.  There wasn’t much meat left on the bones but for a very hungry lynx it was a real find.  For two days I photographed the lynx.  Most of the time he just crouched beneath a dead and leaning spruce snoozing, but a couple of times daily he would slowly rise and take the couple of steps to the bones and begin to gnaw. 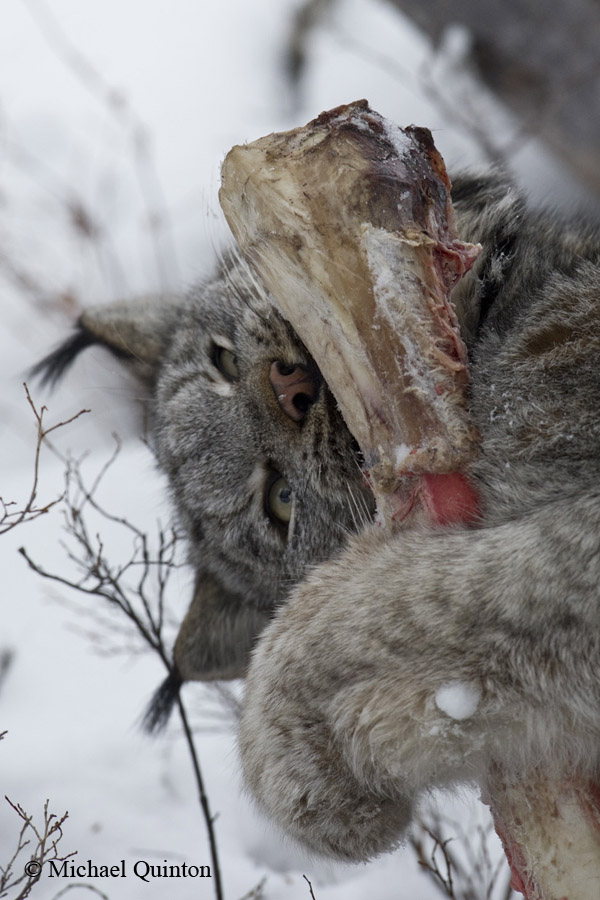 Lynx chews on the leg bone of a moose.  During times of hunger, lynx will be scavengers. 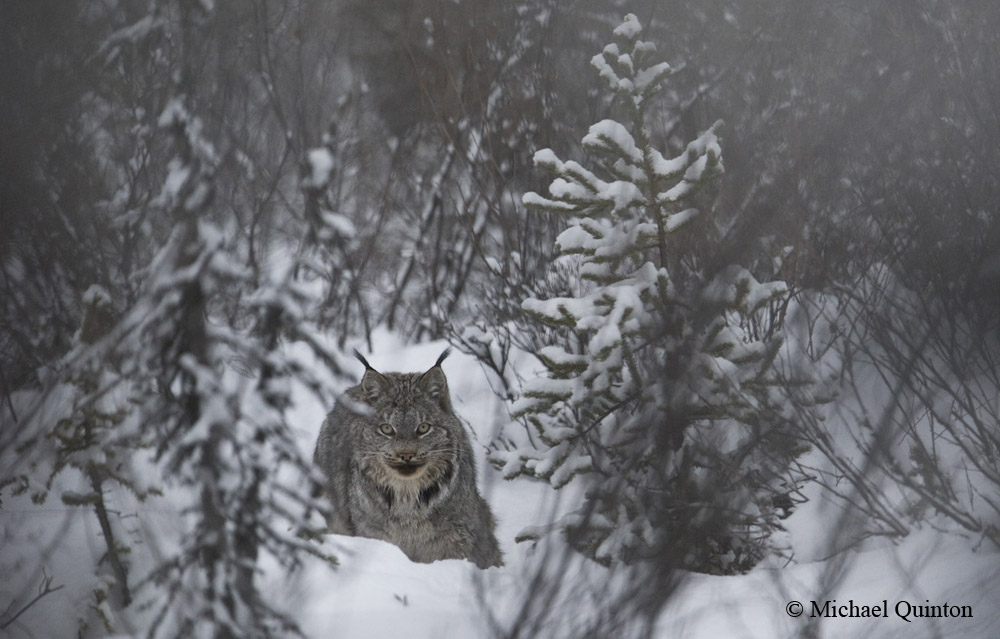 After an hour-long feeding session, the lynx wandered off and pawed out a snow bowl.  He didn’t linger at the lynx-litter box but hurried back to thwart the gray jays.

The lynx was a bit shy as I arrived in the mornings.  At first he would move off and sit on his haunches watching me  a hundred feet away. But within a few minutes he would return.  Some lynx are very shy while others seem to be fearless.  Perhaps, in this instance, hunger overrides caution. and I was able to photographed him from every angle.

One thought on “PHANTOM OF THE BLACK SPRUCE BOG”